As of today, our friend Anton owns a 50ft narrowboat called “Blue Morn”. She was build sometime in the mid 80s.

Computers’re bringing about a situation that’s like the invention of harmony. Sub-routines are like chords. No one would think of keeping a chord to himself. You’d give’t to anyone who wanted it. 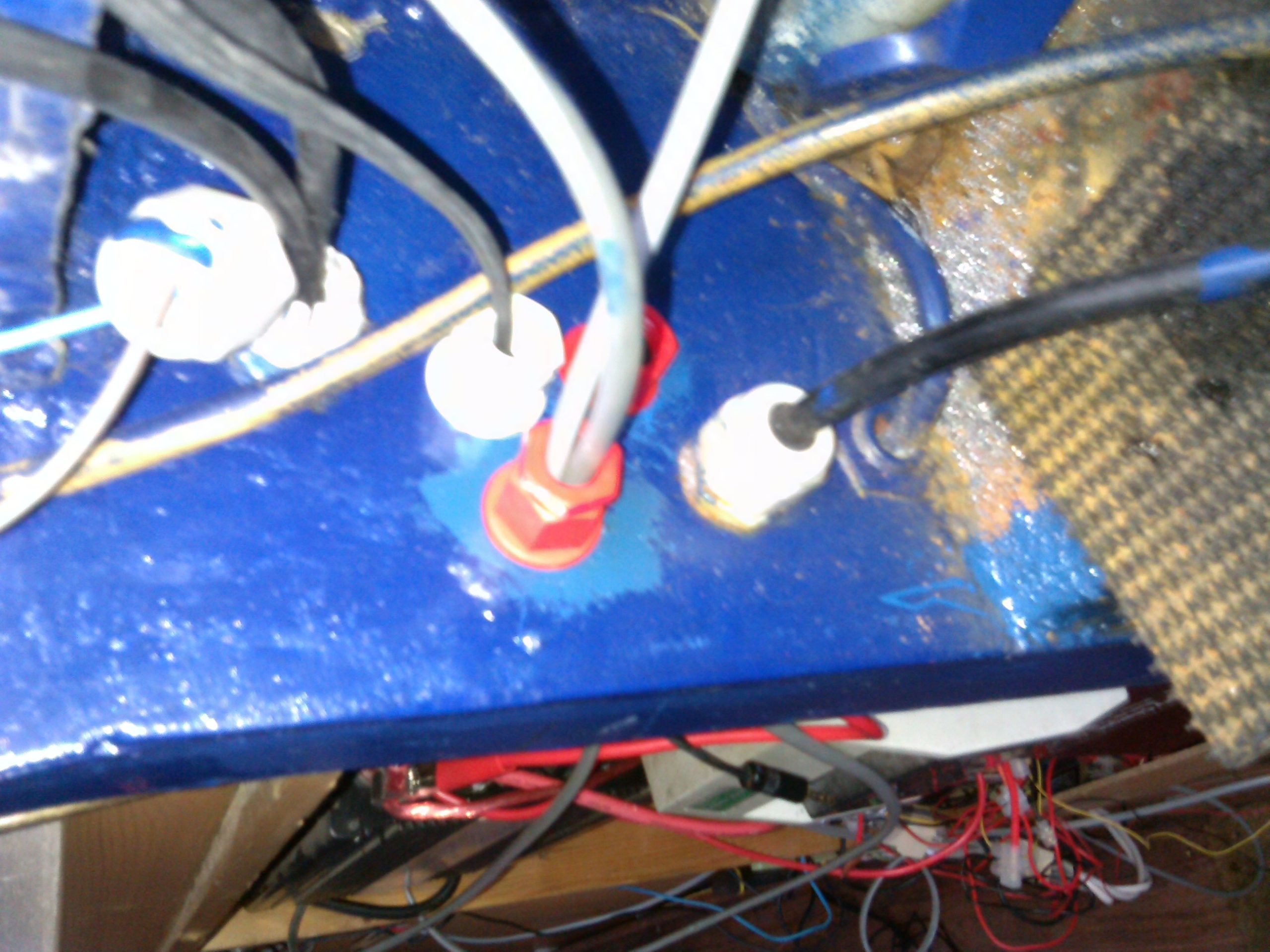 Anton installed 2 more glands and painted the exposed metal with some hammerite. They are used to get cables out for sensors and a hydrophone at the moment.

The first of the three holes took 5 months to finish, the next two 20 minutes. Having the right tools help.

It is also funny that Anton ended up using those red and white glands after 8 years since scavenged them from an abandoned building in shoreditch high street. They even went to greece for few years and returned last summer along with Anton’s toolbox.

Planning to replace the house battery bank. They haven’t been holding much charge for a while now, in fact they have never been in a good state since Anton bought the boat. At the time the previous owner had told Anton that they were ‘new, just 2 years old”

The only reason Anton kept them for so long apart from money is that Anton wanted to learn more about batteries and suitable charging regimes for my lifestyle. Even changing the batteries is lifestyle choice yes.

Now we know bit more now and are better equipped :

What Blue Morn has not yet is better monitoring and metrics about the batteries and energy use overall. This is work in project

Four 12v el cheapo leisure batteries wired in parallel. Each one of them is supposed to provide 110 Ah therefore 440 Ah in total.

Anton is planing to replace them with four trojan T-105 deepcycle batteries. The new batteries are 6V 225 Ah each and they will require to be wired in two pairs in series makeing two bigger batteries that are 12V while halving the combined AmpHours. The two pairs are then wired in parallel doubling the Ah while leaving the voltage at 12V.

The new batteries are due to be installed on Saturday 18/01/14 if all goes well.

Batteries arrive in a pallet and is very complicated to get them in a boat with no fixed address. They are delivered at the kernel brewery, will reload them in the van, transport them at regents canal near the boat and for the 200 meters on the bike trailer!

Anton is replacing the engine startup batteries too while he’s at it.

The new batteries are in place. It took the whole weekend including the transport but just three hours on sunday morning from 9-12 for the installation itself which was quite good I though. I also managed to get smoke coming out of the inverter at some point so I assume I killed it. It wont be missed, it was crap and taking loads of space. My back hurts too although I tried hard to lift properly.

I should have read the user guide before installing the batteries and not try to imagine what a parallel/series setup should look like.

Used the existing cables between the batteries, the connectors are not soldered on just crimped but I couldn’t find the motivation to fix them at this point. Next upgrade. I had to play some tetris to get the negative and positive poles that would feed my loads to the right place. The cables where very tight.

The batteries arrived half charged (12.45V), not sure what I should have expected. I thought they would arrive fully charged. They charger switch to green light in a couple of hours which I find a bit odd. Next morning they where at 12.45 again. Returning from work at 6:30, they looked like 12.55 on a sunny day and not much use apart from boat computer.

The manual mentions that up to 100 charge cycles are needed until the batteries reach their full capacity. Also the cold weather affects them. In any case I will give them some more time and see how it goes.

The need for metrics is stronger now, graphs for voltage as well as the amps used and produced. Waiting for a promising 1 wire adc gadget to arrive from Asia…