This morning after Natascha woke up and went to the front of the boat, she noticed that the door of Anton’s bedroom was wide open. She called him and there was no answer and so she went over to his boat. He wasn’t there and it immediately dawned on her – somebody broke into his boat. Nat came back late last night from a meeting and it was already dark, it must have happened before that. Then she saw that our bicycles on our boats were moved, somebody tried to nick those too. They also tried to enter our boat, for sure.

She called Anton and he came back as soon as he could, and yes, there were several items missing on his boat. Ironically, some things he actually wanted to get rid off.

Even though nothing happened to us, Natascha started to have this uneasy feeling and didn’t feel safe any more. Still we didn’t move the boats which resulted in her not leaving ours until Adnan came back.

Antonios & Natascha had to move the boats and we had to pass the Islington tunnel with the boats towed together. Never done this before, it wasn’t exactly an enjoyable event, but a memorable one. The boats, especially Antonios’, crashed into the tunnel wall again and again, damaged the side lights, scratches on the paint, etc. We had to endure a kilometre of near darkness, once we were out on the other side, there was no suitable mooring in sight.

We ended up at the bottom of the St Pancras Lock and moored up there. Anton didn’t want to go through the lock, Nat wasn’t happy with the location at all, not least because we were the only two boats there. This is in fact a no-go situation for boaters.

Adnan was in Switzerland for a week. Nat was alone, she wasn’t in the right space of mind to do anything, she was still numb from the news about her friend. This was also the moment when we left Hackney behind, it became clear to Natascha that life will not be the same any more, we will be on the move again and again.

Paralysis on her 39th birthday.

This is a trip of 2 miles, 1½ furlongs and 2 locks from Whitmore Road Bridge No 43 to St Pancras Lock No 4 travelling west on the Grand Union Canal (Regent’s Canal).

This will take 1 hour and 10 minutes.

Total distance is 2 miles, 1½ furlongs and 2 locks (not counting St Pancras Lock No 4). There are at least 1 small aqueduct or underbridge and 1 tunnel (Islington Tunnel [see navigational note 3 below]. ).

This is made up of 2 miles, 1½ furlongs of broad canals; 2 broad locks.

Nat got a call from Lucio, whom we offered to stay on the boat previously, that our beloved friend was diagnosed with terminal cancer. She was a mother of three young children. Nat wasn’t sure if she can call to Berlin or not, so she made a few phone calls to other friends in London, things were not going ok. It was a heavy and dark moment, nothing could be done at this point.

This is a trip of 7 furlongs and 1 lock from Broadway Market Visitor Moorings to Whitmore Road Bridge No 43 travelling west on the Grand Union Canal (Regent’s Canal).

This will take 31 minutes.

Total distance is 7 furlongs and 1 lock.

This is made up of 7 furlongs of broad canals; 1 broad lock.

This will take 31 minutes. For initial calculation purposes (before adjusting for such things as overnight stops) this is taken as 1 day of 31 minutes. 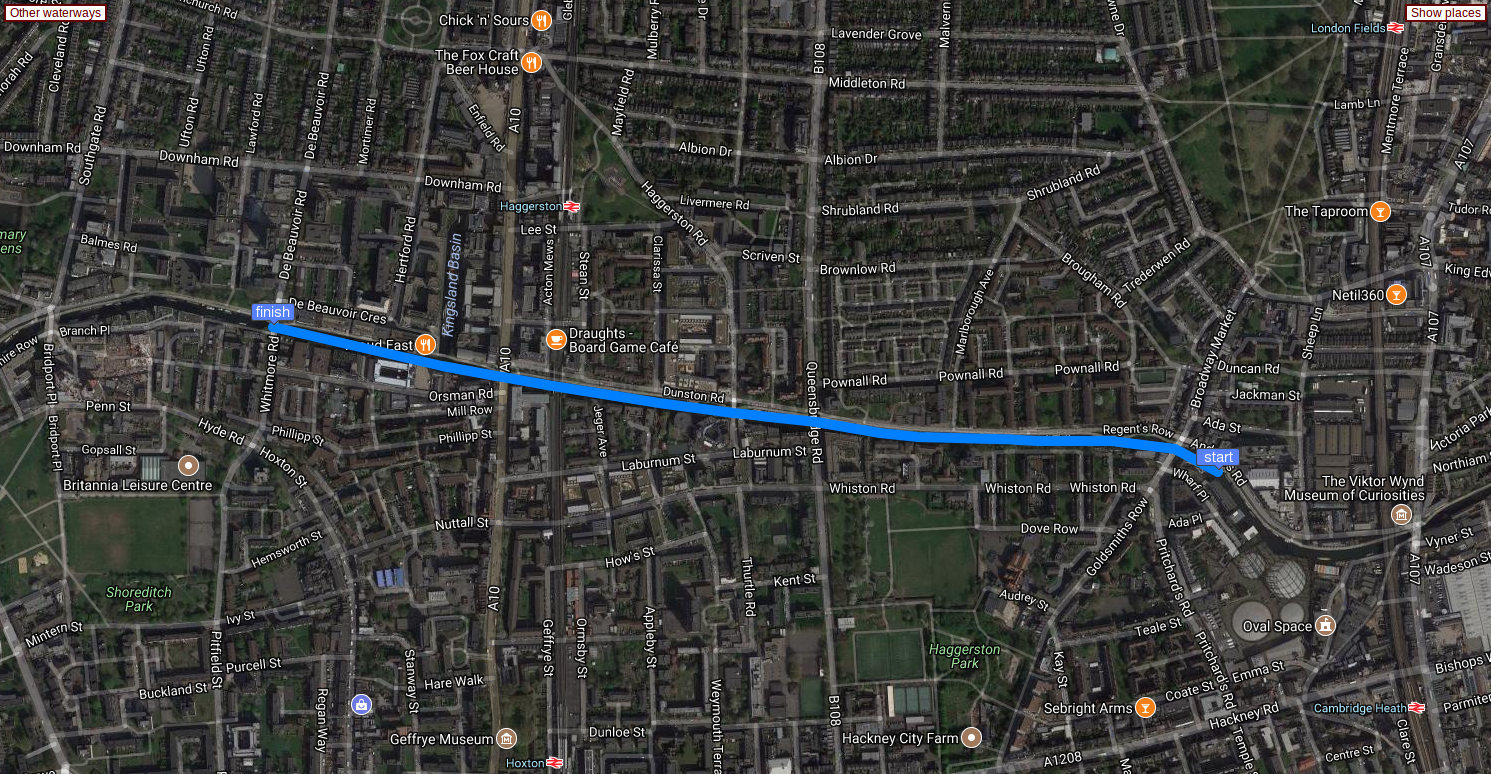 We stayed in our old neighbourhood for two weeks but the time was up, we had to move. Luckily the next stop was in De Beauvoir Town, this is where my friends have their upholstery workshop. And it’s still in Hackney, we didn’t have to leave ‘my beloved’ borough just yet. It was a short cruise and De Beauvoir Town was one of Antonios’ favourite mooring. Our friend, who stayed on the boat prior us moving in permanently, came along.